Throughout summer 2013 the streets of Norwich in the East of England have come alive with 53 colourful life-sized gorillas!

Visitors can follow the trail which meanders through the city and spot each of the fifty three gorillas which have been designed by local schools and community projects, as well as professional artists. For eleven weeks visitors can walk the trail, noting down the unique codes on each animal, for a chance to win local shopping vouchers. More details are on the official website.

The GoGoGorillas project also has a serious side as its supports both the Born Free Foundation and also local charity Break. On 3 October 2013 the gorillas will be auctioned for the two charities. The Born Free Foundation campaigns to protect wild animals across the world and to help threated species such as big cats, elephants and primates.  This echoes the upcoming African Poaching Wars documentary which is fronted by actor Tom Hardy. 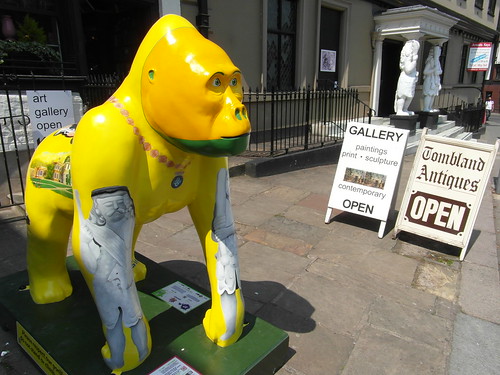 The fine city of Norwich is no stranger to hosting arts and cultural festivals – in fact the city is a designated UNESCO City of Literature. It was also just pipped to the post as the UK City of Culture 2013 by Derry-Londonderry. Norwich will also place itself firmly on the national map when fictional Norfolk DJ Alan Partridge (aka Steve Coogan) holds the premiere of his new movie, Alpha Papa, in the city after a huge Facebook campaign.

The GoGoGorillas project hasn’t been without its issues as one gorilla was subject to graffiti and the “Freddie Mercury” themed gorilla has been removed over legal issues.

GoGoGorillas follows the hugely successful Go Elephants! Project which ran in Norwich in summer 2008, where 53 life-size baby elephants lined the street. Afterwards, local individuals and business across Norfolk bid for the elephants in an auction which raised over £200,000 for charity. In fact, if you drive across the county you’ll spot a few on your way – after all, a life size colourfully painted elephant is hard to miss! Top 7 Things to see and do in Hawaii