Waterfalls are amazing spectacles and they exist in various forms around the world. From tall and showy to gentle trickles, each one is beautiful in its own way and people travel to areas simply to see waterfalls or they make sure to add a waterfall visit to their trip itinerary.

However, there are some waterfalls that are more popular than others. Many people prefer to see the waterfalls that put on a spectacle of raging water, clouds of mist, and rainbows. There are countless numbers of these types of waterfalls all over the world but there’s no way to see them all.

So, in the spirit of chasing waterfalls, here’s a roundup of seven of the best waterfalls, one on each continent. And yes, there is a waterfall in Antarctica. 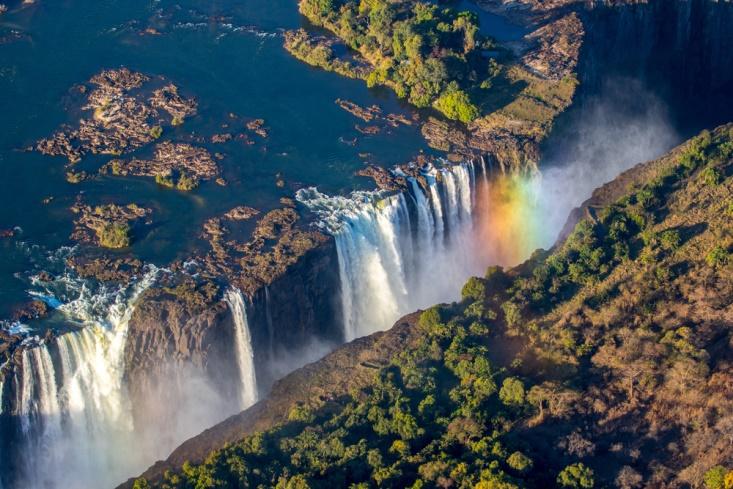 Africa is such a diverse continent that you would be hard pressed to run out of things to do, but if it’s a mighty waterfall you’re seeking then you need look no further than Victoria Falls. Located on the border of Zambia and Zimbabwe this is one of the region’s top tourist attractions and something that really needs to be on your bucket list.

One of the interesting things about Victoria Falls is that it’s the world’s largest waterfall, but not the tallest or the widest. However, when those two factors are combined Victoria Falls has the largest sheet of falling water in the world. There is even a point at the top of the falls where you can get in the water, just a few feet from where the cascade begins. 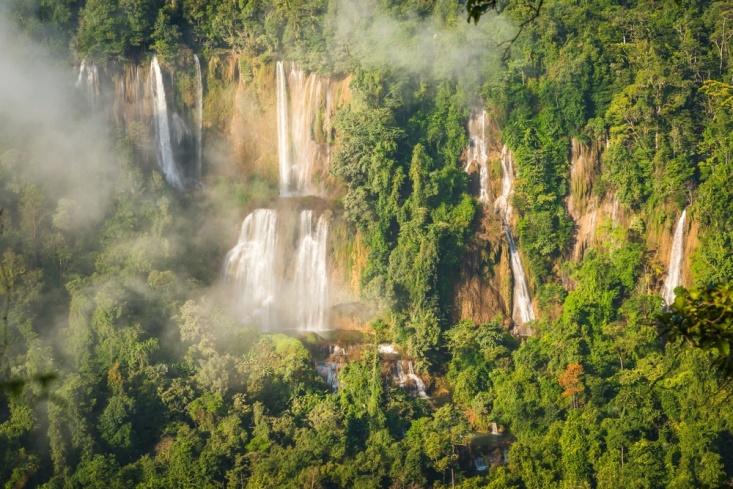 Asia is a huge continent and with such a diverse topography it has waterfalls of all shapes and sizes. Some of the biggest are in China but one standout is Thi Lo Su waterfall in Thailand. Nean Umpang in Tak Province in the northwest part of the country this is claimed to be Thailand’s largest waterfall but official measurements have not been recorded.

It’s a multi-tiered waterfall that couldn’t be described as mighty, but rather a soothing, constant flow of water down levels of rock. It’s part of the Mae Klong River and flows through the Umpang Wildlife sanctuary so the surrounding hiking and scenery add to the appeal of this waterfall.

Perhaps the most surprising waterfall in the world is Blood Falls in Antarctica. Located on Taylor Glacier in the eastern part of Antarctica this waterfall isn’t quite what you might think. First of all it erupts sporadically more like a geyser and the resulting water is blood red due to the high concentrate of iron oxide.

Scientists have studied this phenomenon since it was first discovered in 1911. One of the most unique factors is that the water that comes from this waterfall is actually from a lake that lies 400 meters below the surface. This water is completely cut off from the rest of the atmosphere and contains no oxygen. When the water does emerge the reaction between the oxygen and the iron causes the water to turn red.

For some who have not visited Australia it might seem like one big rock of an island with great beaches and cool cities. However, once you venture into the interior of the country your mind will definitely be changed. Blencoe Falls in Queensland will help you accomplish this.

Located in Girringun National Park, Blencoe Falls first cascades 90 meters down into a pool, then goes another 230 meters to meet the Herbert River. The location is pretty remote but the surrounding area is beautiful and perfect for a camping trip. 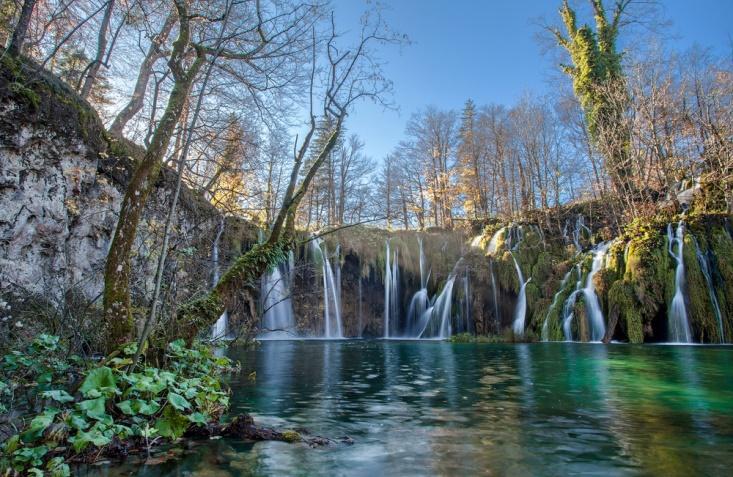 Europe is another one of those continents that has so many waterfalls and there’s no way to choose just one. Iceland is high on the waterfall destination list but there a better one much further south. Plitvice Lakes National Park in Croatia is a stunning wonderland of waterfalls. Due to the karst limestone topography sinkholes and other surface features have been created over time to allow the water to cascade down through sixteen lakes.

Walking trails and boardwalks wind throughout the park so you can get the best views. Be warned however. During the summer months this park is jam packed. It’s better to go in the spring or the fall. 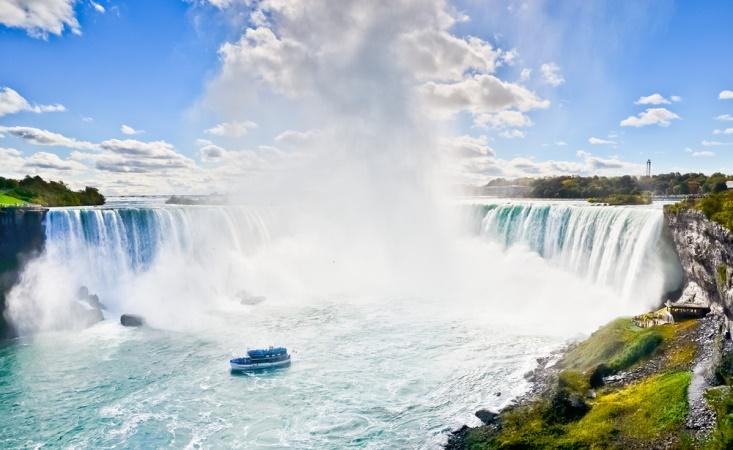 If you asked people to name a waterfall in North America chances are good that they would all say Niagara Falls. Located on the border in northern New York and southern Ontario this waterfall spans two countries and each side of the falls has its own unique aspects.

Popular activities are the boat rides to the base of the falls, hiking along the river, and doing the Behind the Falls tour. Or you could just marvel at the view of the falls from your Niagara Falls hotel room with a view. Family friendly, beautiful, and always lively Niagara Falls is one of the top vacation destinations in North America. 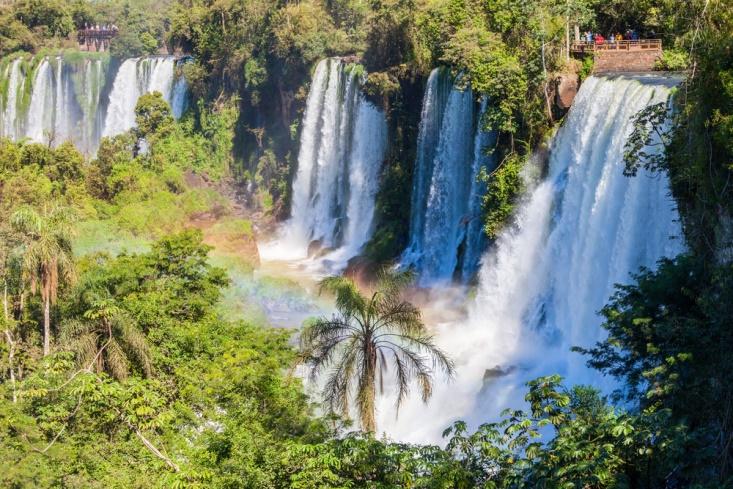 For some reason waterfalls are ideal points to create borders and Iguazu Falls in South America are no exception. Making up part of the border between Argentina and Brazil, Iguazu Falls is 2.7 kilometers wide and has about 275 separate cascades.

One of the appeals of Iguazu Falls is the fact that there is very little development around it. The ecosystem here is thriving so don’t be surprised if you see monkeys, birds, and even a jaguar as you marvel at the falls.

Seven continents, seven waterfalls, seven reasons to travel. What are you waiting for? Get out there and explore these beautiful waterfalls for yourself. 5 Things To Learn Before You Plan Your Next Trip Why You Should Rent a Condo for your Ocean City Vacation